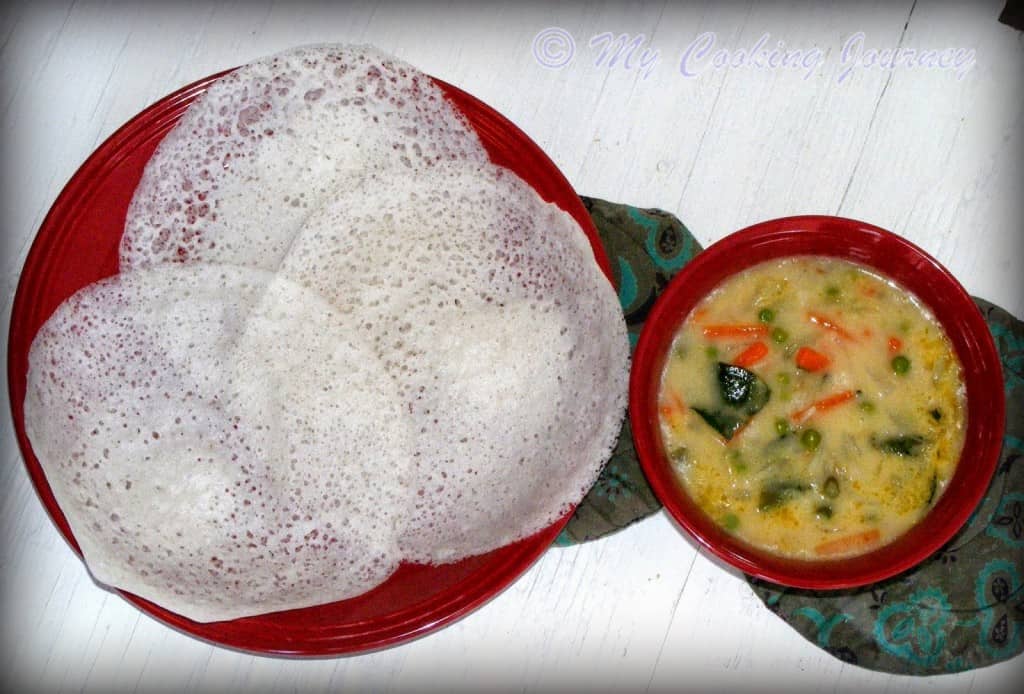 Kerala is a state in the South West region of India. It is bordered by Karnataka, Tamil Nadu and the Lakshadweep Sea. The state capital is Tiruvananthapuram and the language is Malayalam. Kerala has a heavy seasonal rainfall with almost 120-140 rainy days in a year. Kerala produces 97% of the nation’s total Black pepper and also is one of the nation’s largest rubber producers. They also grow many different spices like cardamom, vanilla, nutmeg and cinnamon along with coconut, tea and coffee.

Kerala cuisine has a large variety of Vegetarian and Non vegetarian recipes. Culinary spices are in high production in Kerala, and hence reflect in their cooking. Rice is the staple of the region and several dishes are prepared using rice as a major ingredient. Kerala cuisine has an extensive use of Banana and coconut. Coconut trees are found in abundant and hence the use of it is very high. You could see coconut, coconut milk, coconut oil used in almost every dish.

I have visited Tiruvananthapuram few times as my aunt lived there. During my last trip to India, we visited Munnar, which is very famous for its tea estates. I have also been to the famous Guruvayoor temple once. I am hoping that I will be able to take my kids in the near future and visit more places. 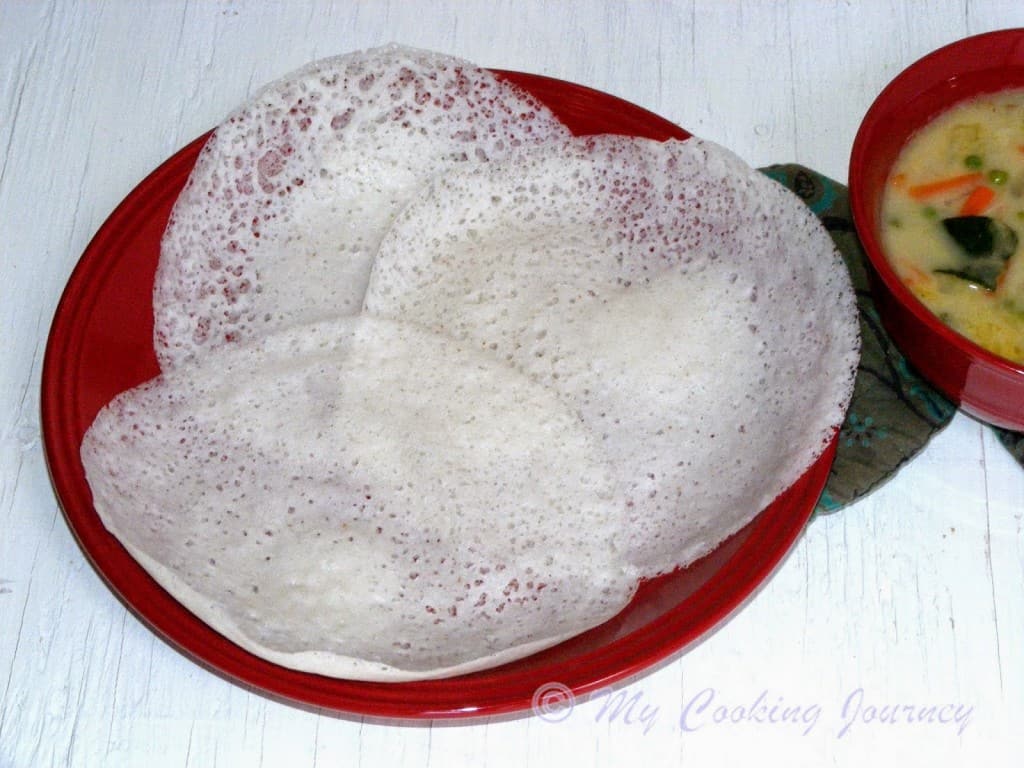 Coming to the recipe I chose today, Appam and Vegetable Stew, right from the beginning I knew I wanted to make this for couple of reasons. I have only eaten appam in my aunt’s place and I loved it. For some reason I was always thinking that it is too much work and stayed away from making it. Every time I ate appam and vegetable Stew in my aunt’s place, I would tell myself that I am going to make this as soon as I get a chance, but I never got to it. In fact, I ended up buying an appam pan almost 6 years ago, but never used it. So to use the pan, I saw this as a wonderful opportunity.

I got this recipe from my lovely senior back in college and one of my dear friends Sujai, who also happens to be a wonderful cook. Within hours of me asking him for the recipe, he emailed me back with all the details and also his aunt’s recipe for the stew. I almost followed the recipe exactly and it was the most wonderful experience. Recently, my little one had eaten appam with stew in one of his friend’s house and he loved it. The minute I told him what I had made for lunch, he was super excited. So, finally made the delicious Kerala special appam and vegetable Stew, while making the best use of my pan. 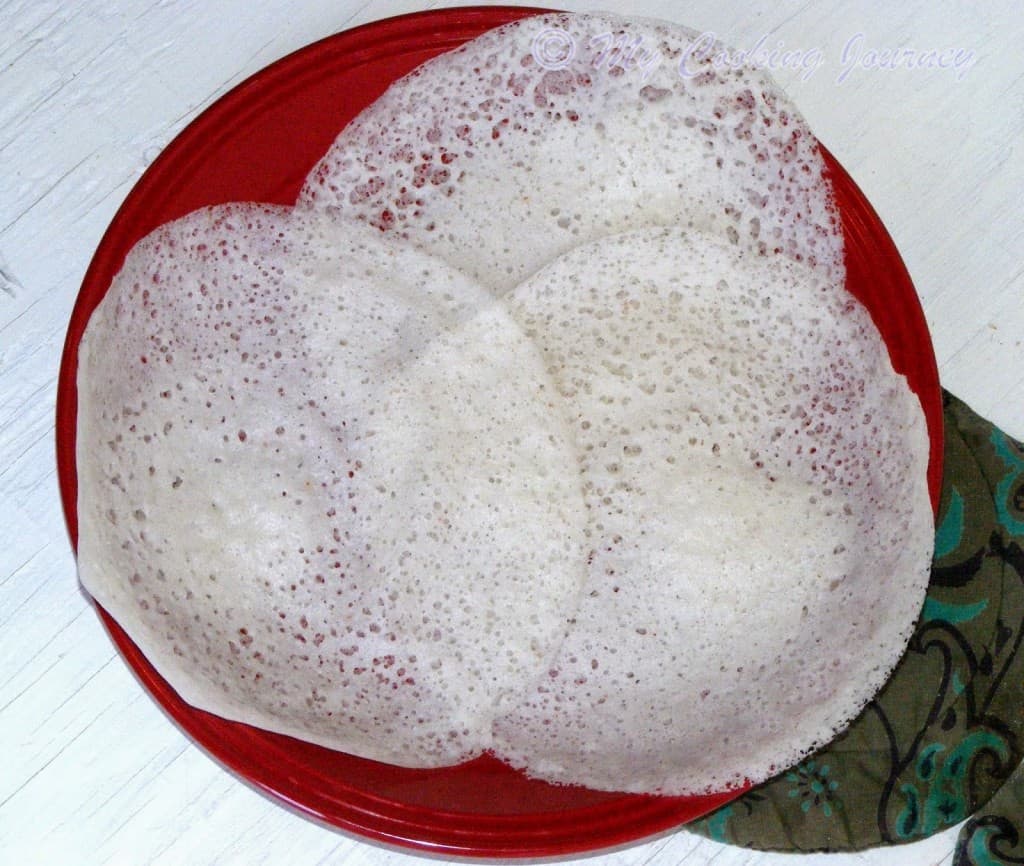 Appam is a fermented rice pancake which mainly consists of rice and coconut. It is very famous in the Kerala cuisine and eaten mostly as a breakfast or dinner. These are traditionally made using toddy to ferment the batter, but now mostly yeast is used for this process. There are many people who still use the traditional way as they do not like the flavor of the yeast. My friend mentioned that the recipe of appam varies from region to region and this is a Malabar recipe which is followed in areas like Palaghat and Trissur stretch.
The batter usually needs about 8 hours or overnight to ferment, but for whatever reason, within 2 ½ hrs my batter was entirely fermented and was overflowing. Not that I complain about the quick fermenting, but the clean up was sure a big process. Thankfully I had it prepared for the lunch. If I had left the batter to ferment overnight, I cannot even imagine the fate of my little cabinet (which serves as the heat spot for all my fermenting jobs).Preparation time – about 8 hours
Cooking time – about 40 minutes
Difficulty level – easy 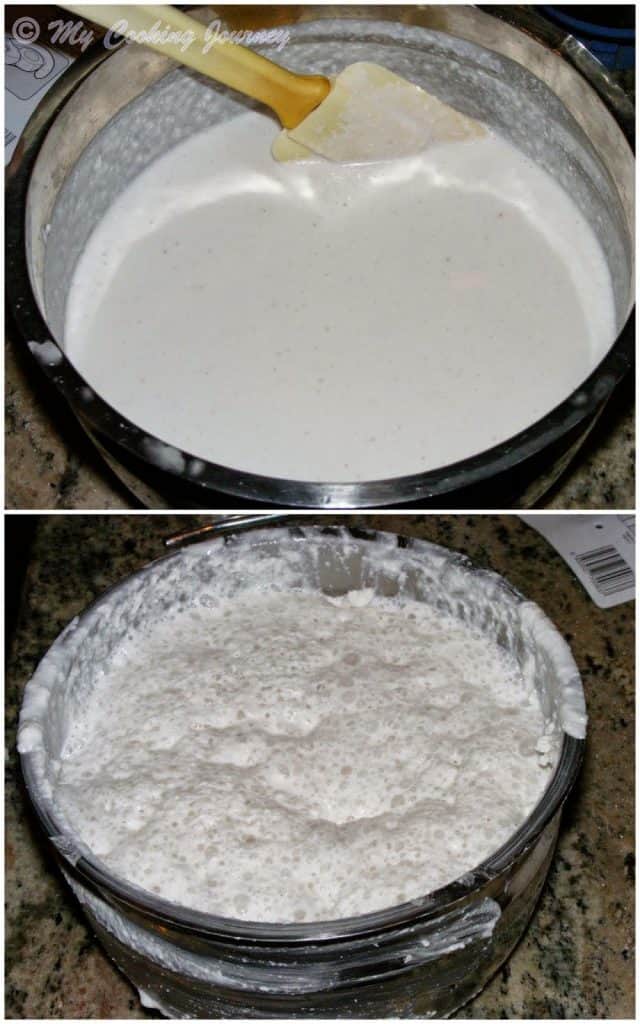 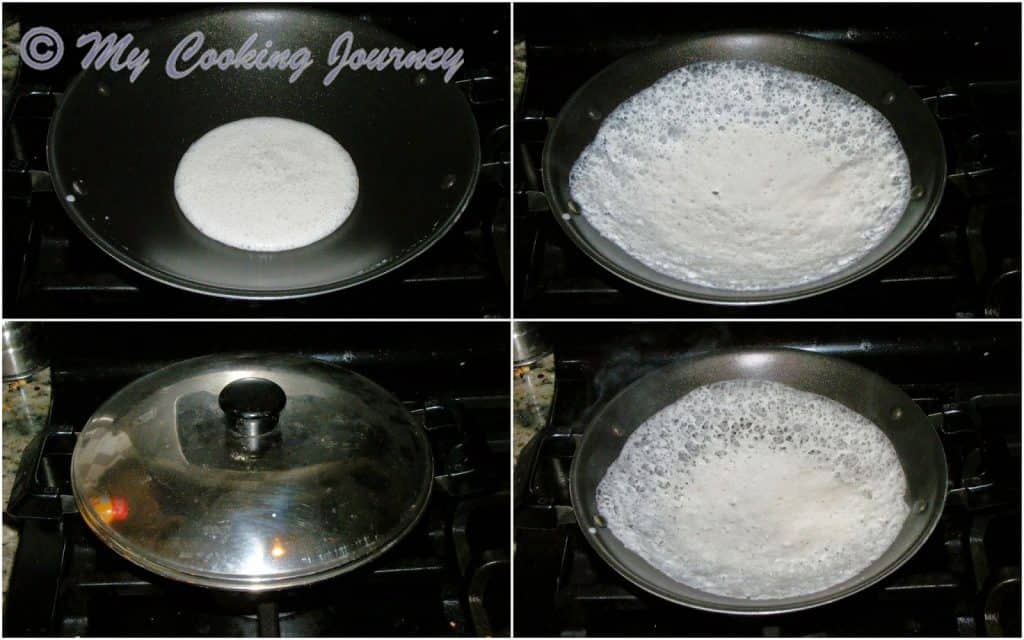 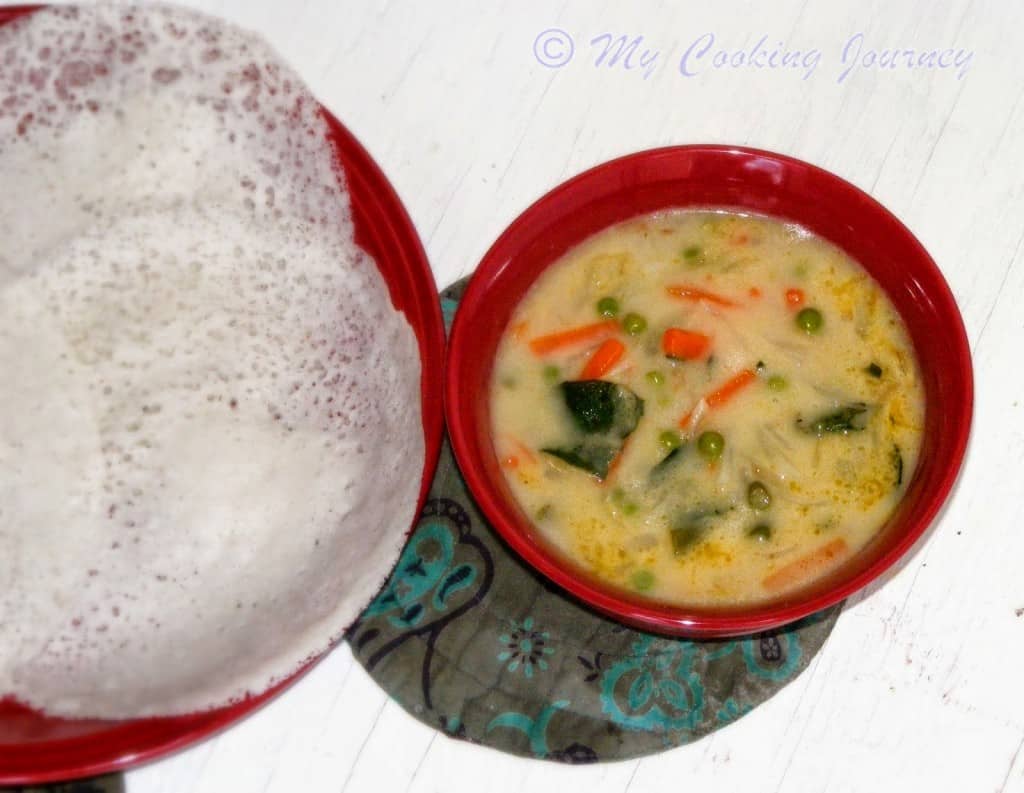 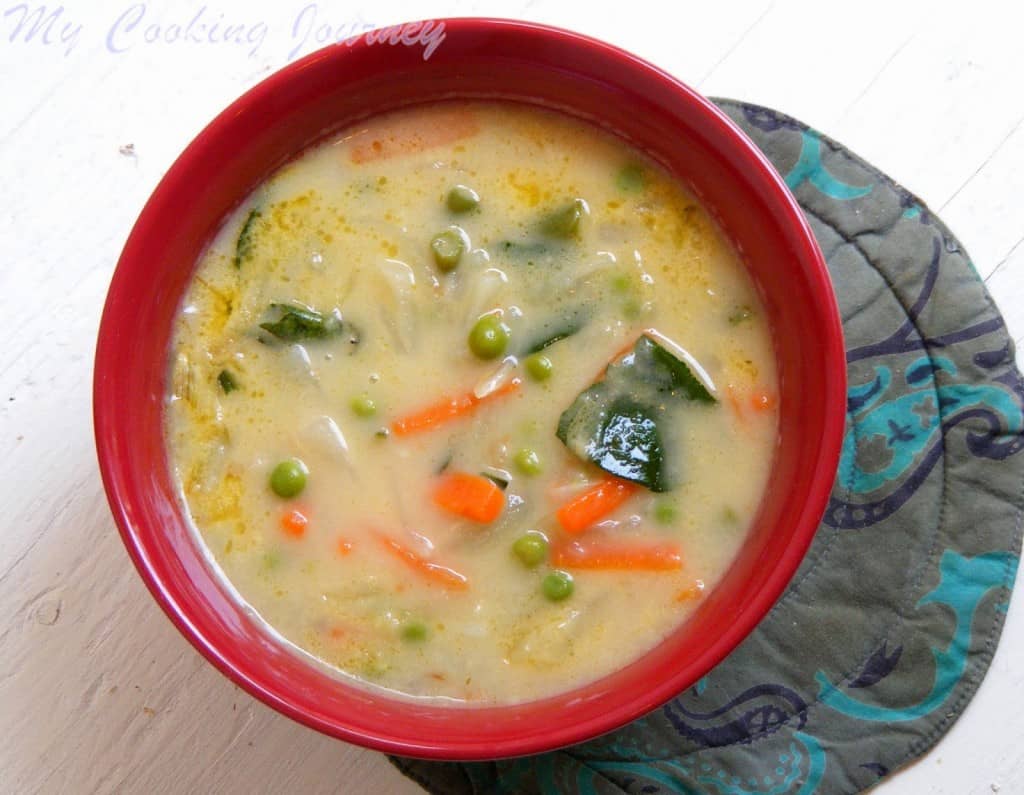 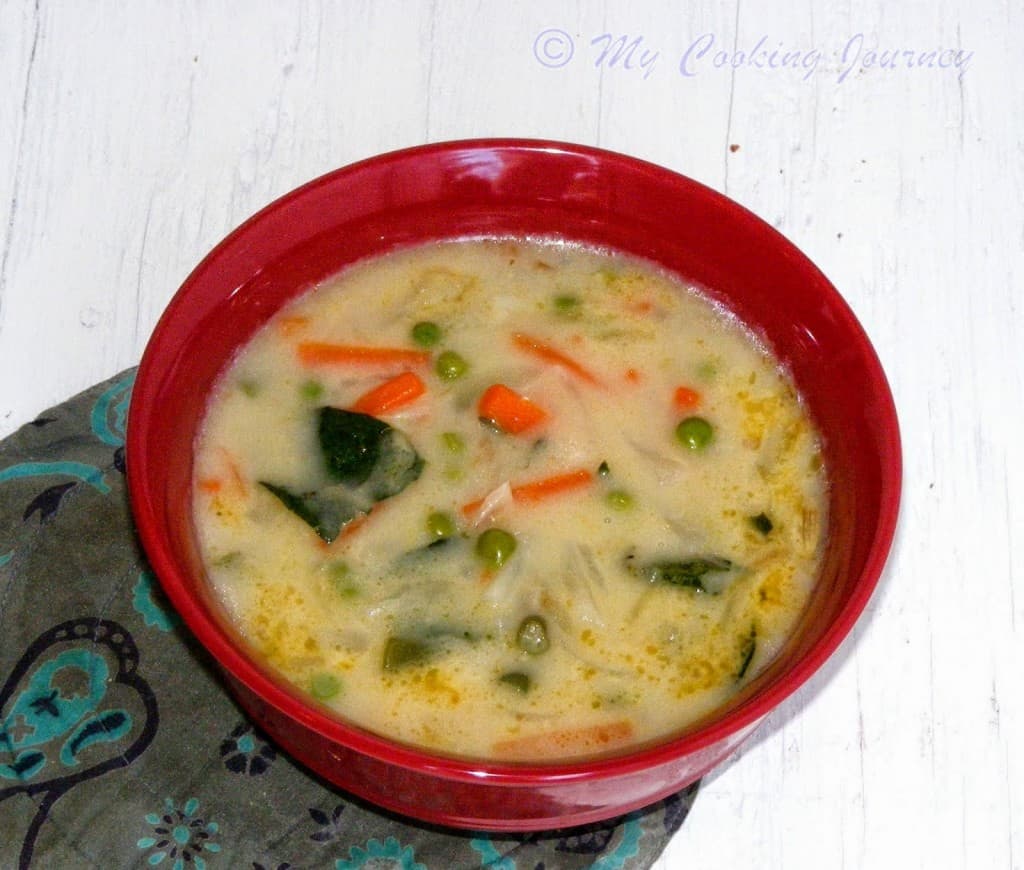 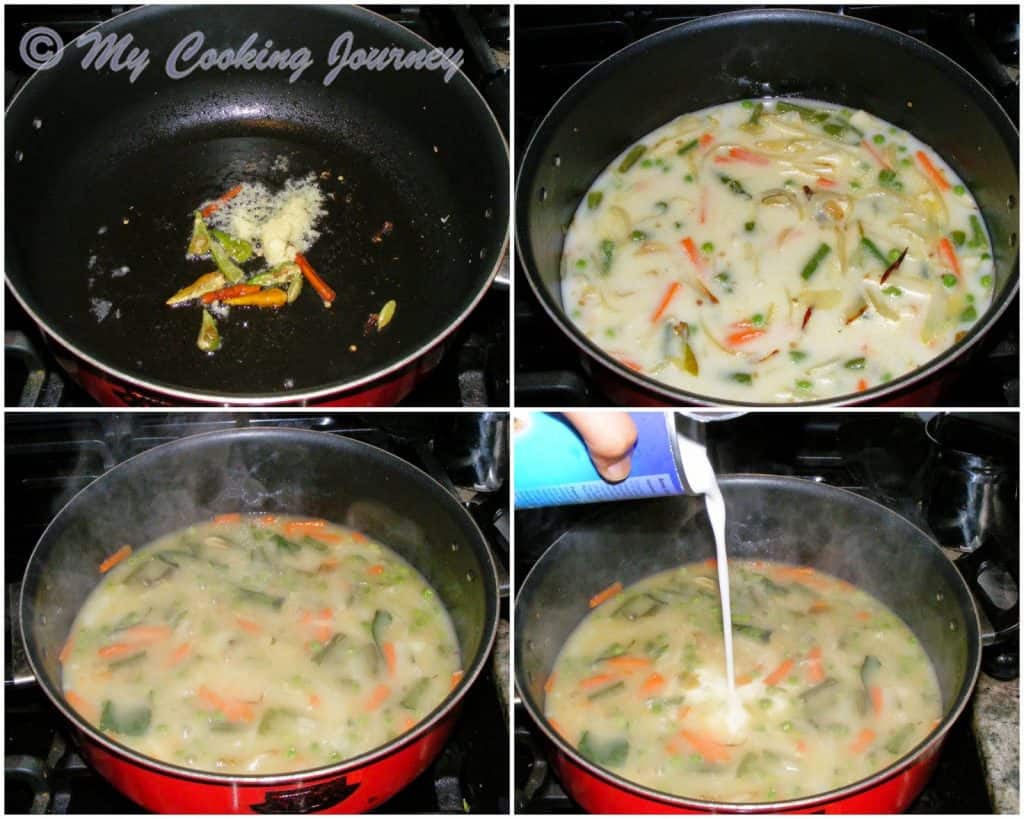 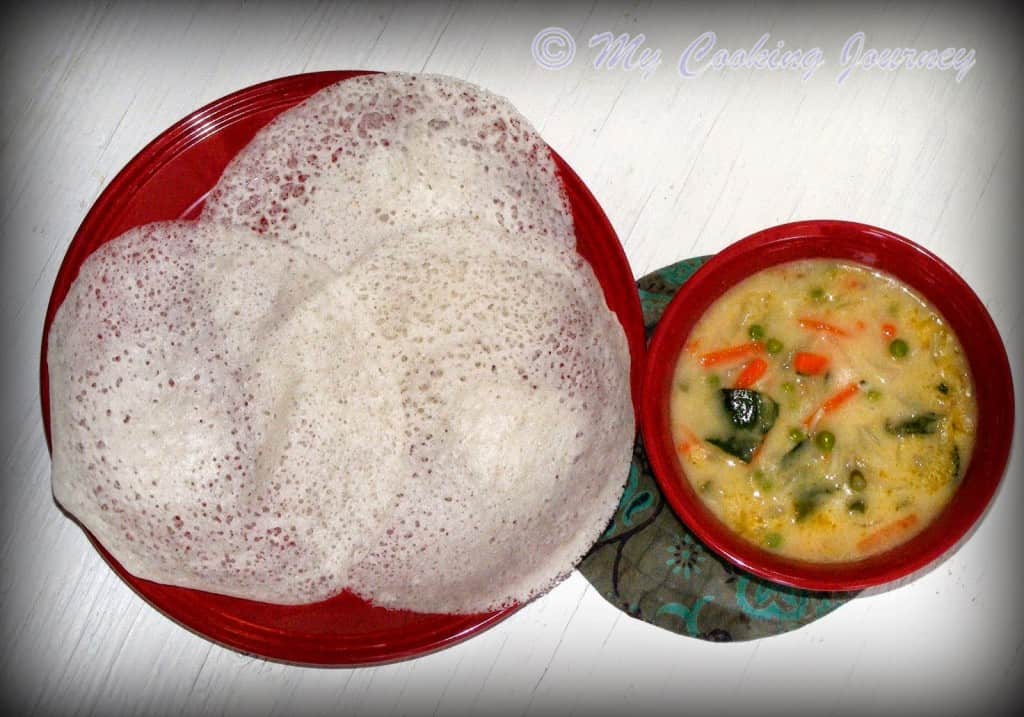